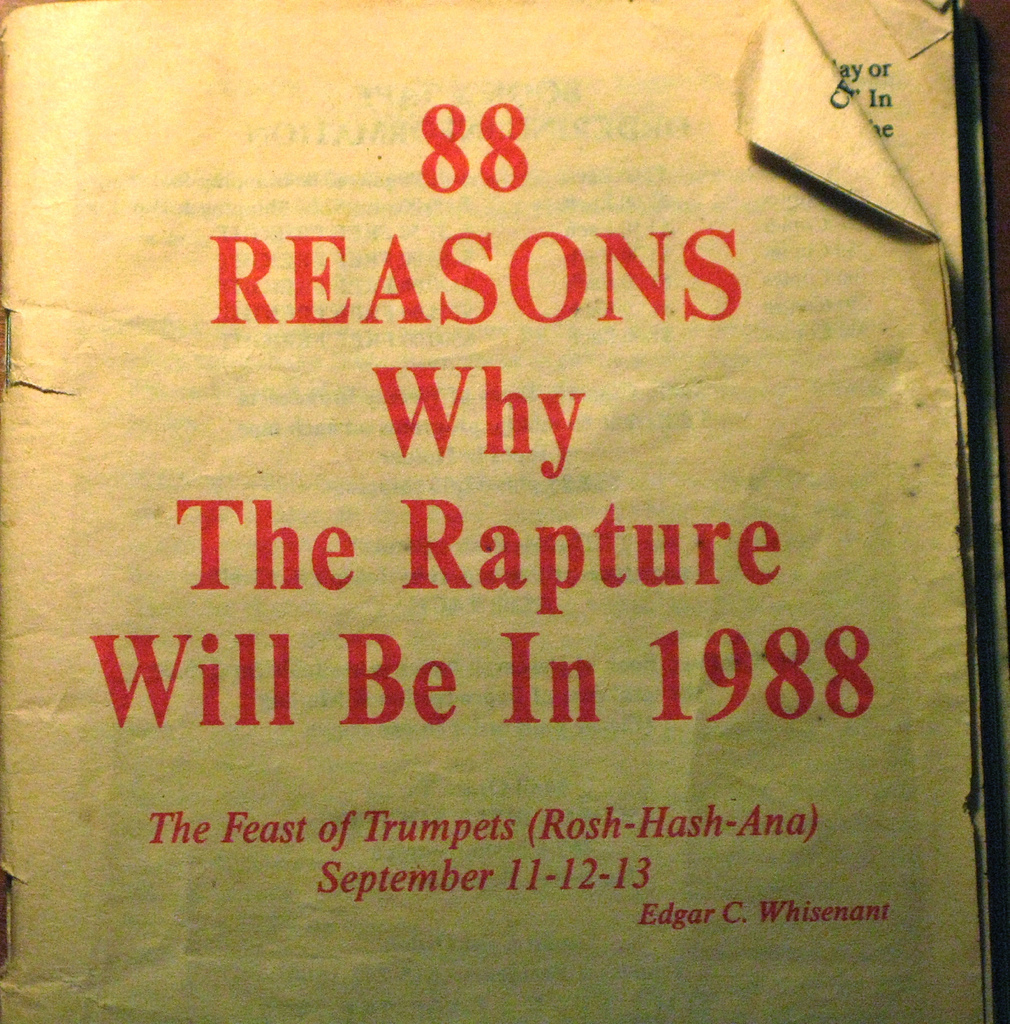 Jesus was coming back and I didn’t want him to. I hadn’t had a chance to have sex yet. It was 1987. I was fourteen. I had about a year left to live! 1988 was just around the corner and the year signalled forty years since Israel had become a nation in 1948. It was obvious to some that this was a fulfillment of biblical prophecy about to usher in “the end of the world.” A man by the name of Edgar Whisenant was so convinced that he published a book called “88 Reasons Why the Rapture will be in 1988.” 300,000 copies were mailed free of charge to ministers across America and 4.5 million copies were sold in bookstores. Whisenant was even quoted as saying, “Only if the Bible is in error am I wrong; and I say that to every preacher in town.” Ironically, when nothing happened, instead of declaring that “the Bible was wrong” Whisenant went on to make predictions (and write books) for 1989, 1993 and 1994.

As a teenager I was inundated with predictions about events like the “rapture” - a belief in some church circles that says that Jesus will take all the Christians off of the earth a few years before his second coming. Our youth group watched cheesy Christian horror movies like “A Thief in the Night” where God’s people suddenly disappear. When those “left behind” refuse to get their MasterCard tattooed on their forehead and bow down to the world leader (a Russian of course) they are persecuted. Their execution was by guillotine resurrected from the French revolution. I guess the point of these movies was to scare the hell out of us so we would make sure we were part of the rapture.

We were warned that the satanic number 666 was hidden in the bar codes of our cereal boxes. Other products were to be boycotted because they were in league with a world banking system that was going to take over the world alongside of the United Nations. The Russian leader Mikhail Gorbachev was the obvious up-and-coming anti-Christ. The birthmark on his forehead was proof that he was even born with the “Mark of the Beast.”

It was like living in a science fiction movie and being constantly told the sky was falling. The problem was that it never fell. How many times can the boy cry wolf and people still come running? This question baffles me as I see people, a lot older than me, who have been through many more predictions than I have, still running after the next prediction. It’s Y2K at the turn of the millennium. It’s the Mayan calendar running out in December of 2012. Now preachers are doing “Christian” astrology and making predictions about 2014 and 2015 according to the “Blood Moons.” The Russians are the bad guys, or is it North Korea, or Iraq, Iran, China or the Russians again. It’s never America. Is that because most of these predictions come from Americans!?[1]

I’ve become cynical of the whole thing. Plus, when I started to study the Bible I just couldn’t see it fitting with the way people were ramming the newspaper into it. I’m not denying that scripture teaches that Christ is going to come back. It does! And I believe that he will! But the rapture? Israel needing to rebuild the temple? People getting a 666 computer chip implanted in their forehead to purchase food at Superstore? A one world government?

I then started looking into history and saw how people from every generation have seen their world events “predicted” in the Bible. This made me wonder if the Bible is meant to be interpreted like the writings of Nostradamus or the ink blots psychologists hold up in front of your face – everybody seeing whatever they want to see. As Lorne L. Dawson notes in his book Comprehending Cults:

Biblical sources have stimulated speculation about the preparation for a time when ‘time will be no more….’ In 1525, for example, during the Protestant Reformation, visions of a new age and the final triumph of good over evil inspired the radical and charismatic Protestant theologian Thomas Munster to lead a mass revolt, known as the Peasants’ War…. A similar gruesome fate befell the Anabaptist followers of Jan Matthys….

The Middle Ages were marked by hundreds of apocalyptic uprisings, all with disastrous results. Similar beliefs have persisted into the modern world, playing a prominent role in the cultural history of the United States…. The colonizing venture that began at a time of intense apocalyptic awareness in England meant that it, like everything else in these years, took on an aura of eschatology (i.e. involving doom and judgment). Though less prevalent in the nineteenth century, prophecies of the imminent end of the world inspired many uniquely American religious groups, like the Millerite movement of the 1830s and 40s, which gave rise to the Seventh Day Adventists; the new apocalyptic vision of Joseph Smith, which laid the foundations of the Church of Latter Day Saints (that is, the Mormons); and the apocalyptic claims of Charles Taze Russell, which undergird the teaching of the Jehovah’s Witnesses. In fact, talk of the apocalypse permeated the revivalistic cultural of the Methodist and Baptist churches throughout the nineteenth century and continues to this day.[2]

I began to discover that all this “rapture” stuff is a relatively recent theological “invention” coming out of America from the mid 1800’s – the same time numerous “ends times groups” developed in America, like the Seven-Day Adventists, Jehovah’s Witnesses and even stranger groups like the Mormons and Christian Science. The Rapture was also only accepted by a small, fundamentalist wing of the church. As these positions grew in popularity some groups, like Dallas Theological Seminary, have made the rapture a point of orthodoxy.

The rapture notion goes like this: Jesus is coming back, and when he does, he will first return before a time of so-called tribulation begins, calling up into the clouds with him those who are "saved." Horrible suffering will then occur on the miserable Earth for seven years. Then Jesus will come yet again, for a final judging. There are many different versions of this scenario, so it's difficult to summarize. It's fair to say, however, that only fundamentalist Protestant churches bother to think about the rapture at all. (Catholics discount the idea completely.)

The rapture concept is relatively new. It started with an Anglo-Irish theologian, who in the 1830s invented the concept. This may come as a shocker to many, but it's a fact: Before John Nelson Darby imagined this scenario in the clouds, no Christian had ever heard of the rapture.

The idea was popularized by Cyrus I. Scofield, an American minister who published a famous reference Bible in 1908, one that developed the idea of an elaborate series of final periods in history known as dispensations. Scofield, like Darby, read the Book of Revelation as a vision of the future, not a fiery dream of the destruction of Jerusalem by the Romans in A.D. 70.[3]

Today I stand with the majority of Christians and denominations in believing that Jesus Christ will come back and, when he does, the dead will be bodily resurrected, the heavens and the earth will be made new, and his children will live with him forever.

I am an amillennialist. I believe the millennium is the spiritual reign of Christ now. I believe that God has only one people, not two. The true children of Abraham are both Jews and Gentiles whose faith is in God’s messiah. In the Old Testament the majority of these people were from the nation of Israel. In the new covenant, the majority are Gentiles. I believe that this was God’s plan from the beginning. This is not replacement theology because the church is not replacing the nation of Israel. There only ever was one Israel - that is, Jews and Gentiles who share in the faith of Abraham. This means that not all who are from the nation of Israel are of the spiritual seed of Abraham. To say this is anti-Semitic is absurd because even orthodox Jews believe this, although their understanding of who “true” Israel is would be different from mine.

I love the Jewish people just as I love people from every nationality and religion. I believe all people should be treated fairly and with respect. All people should have fundamental human rights, as laid out by the United Nations. I do not believe it is wise for Christians to support the nation of Israel in whatever they do simply because of (in my view) shoddy biblical interpretation. And, even if those interpretations are correct, we see many biblical and historical examples of messing up when we try and “help” God fulfil his prophecies.

I believe that Christ fulfilled what God set up in the Old Testament. God does not have to still fulfil his promises to Israel. He already has fulfilled them. Jesus is the fulfilment of them. Christ is the temple. Christ is the Sabbath. Christ is the lamb. Christ is the High Priest. Christ is the Davidic king. Christ is the land. Christ is Israel. In Christ, God’s purpose and plan to reveal himself to the world through Israel has been fulfilled. There is no need to “go backward” and rebuild the temple, retake the land and reinstated the sacrificial system. Those were only illustrations. Christ is the reality. This is the message of the New Testament, especially of books like Matthew, Acts, Romans, Galatians and Hebrews.

When it comes to the end of the world I do not believe we should live in fear, especially if it disengages us from involvement in the world. I believe Christians are biblically mandated to live in such a way as to make the world a better place today for everyone, regardless of their race, religion or gender. I want to live each day the way Martin Luther put it when he said, “Even if I knew that tomorrow the world would go to pieces, I would still plant my apple tree.”

There is no need to write you, friends, about the times and occasions when these things will happen. (1 Thessalonians 5:1).

[1] In his memoirs, theologian Lewis B. Smedes discusses his childhood through the Great Depression and how difficult it was for his mom to trust getting government help. She was warned by a grocer that Roosevelt was probably the Antichrist and that the New Deal was the beginning of the Great Apostasy. – Lewis B. Smedes, My God and I: A Spiritual Memoir (Grand Rapids, MI: Eerdmans, 2003), 20-21.