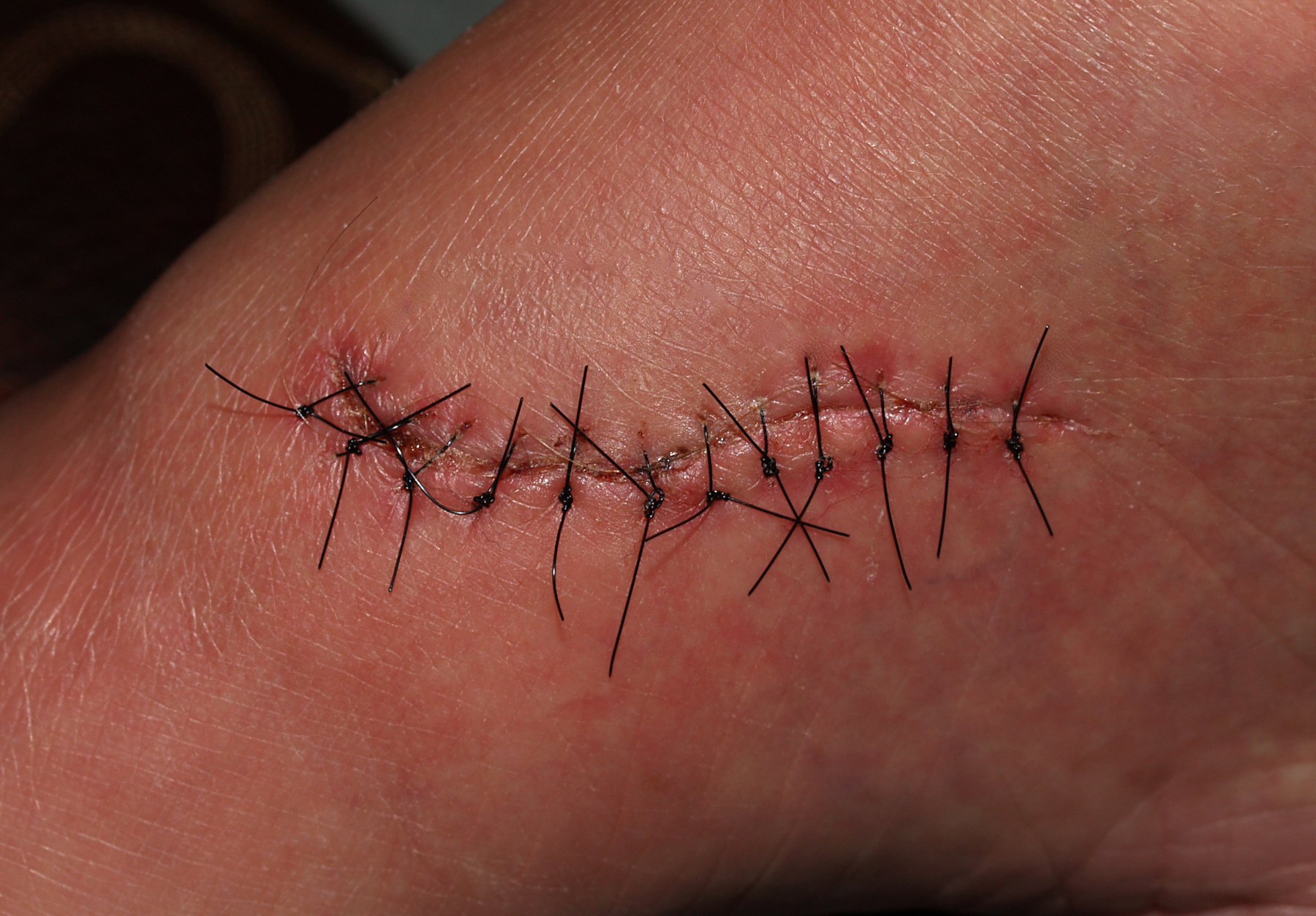 Gym class was over and my friends and I were hanging out in the change room in our underwear. We were taking turns doing chin-ups on a bar above one of the bathroom stalls. Each guy did half a dozen chin-ups and then jumped down to let the next guy have a turn. There was no way I was going to let these guys show me up. I was determined to do the most chin-ups on my turn. When I did push through to victory, in a moment of bravado, I jumped down triumphantly. The only problem, I didn’t land on my feet. On the way down my right butt cheek caught the hook that latched shut the stall door. One minute I was in glory. The next minute I was in agony. As I groaned on the floor and held my bleeding butt my friends laughed at me hysterically. When they realized I really was in pain someone ran and got the teacher.

This was an awkward situation. I could only pull my pants over my left side. I had to hold a towel over the other side for modesty’s sake and to try and stop the bleeding. Since this was between classes I limped into a packed hallway and make my way to the front office. There Carrie, one of the most popular girls in my grade, was helping the secretary with her work. She agreed to drive me to the hospital in her truck.

What do you spend thirty minutes talking about, with the most popular girl in class, when you’re sitting in her truck on your left cheek while holding a towel over your bleeding exposed right one? I cannot remember our conversation.

At the hospital I received four stitches and couldn’t sit for a week. Every time I would bend my legs the stiches would stretch, not to mention the itch. This resulted in a week of standing at the back of my classes trying to resist the urge to scratch my behind. For a while I became the “butt” of everyone’s jokes.

Today I have a scar to verify my story, which I can proudly display to my wife. The scar is also a good reminder about pride coming before the fall.

Another story from my grade ten year also deals with crushed pride. This story is more serious. I’ve always been a talker and I’ve always been a bit of a clown. These traits often found me in the role of class clown – a label hard to shake once you get it.

It was during C.A.L.M. class (Career and Life Management) that I really played it up. We had a teacher going through a number of personal issues and these were affecting his professionalism. We jumped all over him and he eventually left our school with a nervous breakdown. I, unfortunately, played a big part in this. We would try everything to get him to snap. We’d scheme up ways to disrupt his class, distract him, get him off track in his lesson and make sure the buzzer went before he assigned any homework. After one class of this constant barrage, he lost it. He started ranting and pacing and talking incoherently. We found this both humorous and scary.

During one class he had had enough of me and sent me into the hall. I knew he was going to come out and lecture me and so I was trying to control my giggles. I was expecting the typical, “Do you think this is funny?” comments as I tried to keep a straight face and look in his eyes. That’s not what happened. This time he said seven words that destroyed me. He looked at me and said in a defeated voice, “I thought you were a Christian.”

I was speechless. I was angry. My faith was important to me and so this hurt. I wanted to lash out. Swear. Tell him he had no right judge me. Tell him he was a pathetic teacher who couldn’t control his students. But I knew he was right. My behaviour was not Christian. I was speechless. I went home that day under a dark cloud unable to talk to anyone.

At a point like this I’ve watched many Christians make a big mistake. They feel the horror, guilt and shame of being a lousy person and then get stuck there. That’s how I felt that evening, but feeling this way accomplishes nothing. I knew I had to do something, but I also knew it was not going to be easy.

The next day I sought out this teacher in private and told him that what he said to me was correct. I apologized and promised to stop misbehaving in class. That was hard. Even harder was living up to my word in front of my friends. When they saw the change the teasing started. I was “sucking up to the teacher”. I was a hypocrite. People even started suggesting that I was in an “inappropriate relationship” with this teacher.

When I recall how I contributed to this man’s breakdown I’m reminded of how evil I can be. I am not a good person. I’m arrogant to the point of callously rejoicing and laughing at the pain of others. I want to be popular. I want to be liked. And I’ll compromise my beliefs to get these things. I’m not a nice person.

I’ve decided this gives me four options. I can be my natural self, which I don’t like and don’t want to be. I could wallow in self-pity about what a loser I am. I could try to be a good person by following the “good person” rules and end up becoming another arrogant hypocritical church goer that the world shakes their finger at. (I’ve learned long ago that rule following doesn’t change one’s character). Or, I could repent of my sins and turn my life over to Jesus.

I am not a Christian because I am a good person, but precisely the opposite. I’m a bad person who doesn’t want to be bad, but I have the inability to do otherwise. I don’t want to live in constant shame of my badness, nor do I desire to be a religious do-gooder. With these options, I’d rather be bad and go down in flames.

But there is an attractive forth option. It is choosing to follow the one who is truly good. Jesus Christ has become my life. He is working on me so I don’t need to stay the way I am. He has forgiven me so I don’t need to live in guilt. And he has let me join his mission. Life is found in Jesus, not in “being good.” In fact, I’d rather risk making mistakes for Jesus (as his disciples did), than be too scared to live life to the full. It is for freedom that he set me free. (Gal. 5:1). But by the grace of God I am what I am. (1 Cor. 15:10).