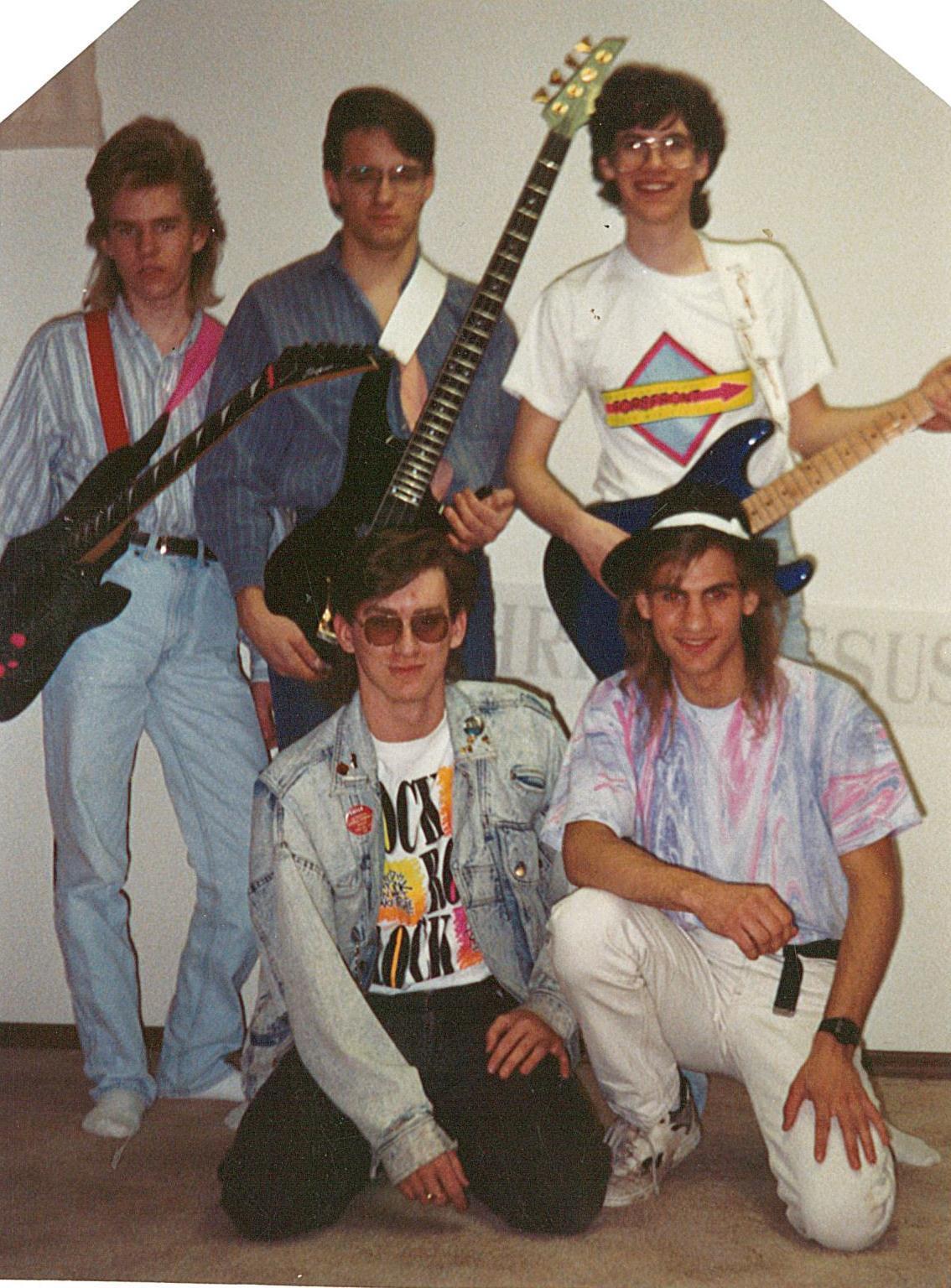 I like my music loud, heavy, intense and distorted. My favorite bands are Stryper, Bride and Skillet. In grade 11 I decided to start my own Christian rock band. I had the look – long big hair down the middle of my back, an earring, tight jeans and a leather jacket. I began learning to play the keyboard and write music. (The first song I learned was “Jump” by Van Halen). I now needed a band. After testing several members I eventually settled on a bass player, two guitarists, a keyboardist and myself on lead vocals. Unable to find a drummer we ended up using a preprogramed drum machine. We named ourselves Exhorter!

Hanging with these guys brings back my best High School memories. We’d setup on the cement pad in front of my house and, since we were out in the country, and crank the music to 11! Playing rock music outside, on a cloudless summer day, with your best friends, has got to be one of life’s most pleasurable experiences. Often we’d have weekend jam sessions complete with a sleepover. The games, laughter, jokes and music bonded us. Sometimes other friends would come and listen to us. We didn’t do much “touring”, but we did play in few churches and school gyms. One country church was so old that, once we plugged all our instruments in, we drained the power out of the building and tripped the breakers. We had to run an extension cord to the pastor’s manse next door for extra power. In the end only eleven people came out, but we didn’t care. We would have rocked the place if it was empty!

During High School I got bolder in my faith. I attended a small country school with a graduating class of just over 20. Most people’s favorite pastime was getting drunk at the weekend bush parties. (Even my ten year reunion was a bush party where people sat around and got drunk. The only difference was that they looked worse).

I was the only Christian in my class, and one of the few in the school. Each Halloween the school put on an air band competition. Basically, this is a competition where you play another band’s recorded music and pretend to be preforming it yourself. Because it was Halloween I noticed that the songs being picked were filled with dark messages. Some of them were even satanic. I decided this was an opportunity to take a stand for Jesus, but through a medium my friends understood. So I entered the competition and did the Stryper song “To Hell with the Devil”.

Stryper was the best known Christian metal act at the time. They were so popular in the late 80’s that they broke into the mainstream. Songs like “Honestly” and “Calling on You” became the number one requested songs on MTV, beating out competitors Bon Jovi and Def Leppard. Stryper was the first metal act to ever have two top ten MTV songs at the same time. So we’re not talking about cheesy church music. Stryper was a respectable act that could play as good as anyone.

For the air band competition I dressed in yellow and black stripes, made a yellow and black guitar frame in shop class, with Isaiah 53:5 plastered along the arm, threw Bibles into the crowd (which the school later made a rule against) and belted out:

To hell with the devil

After the competition I was called back on stage. I’d won first place and was handed an Ozzy Osbourne album as my prize. Knowing that Ozzy sings the opposite of what Stryper stands for, the school started shouting in jest, “Smash it, Smash it.” Feeling this would be disrespectful I simply accepted it and later gave it to a friend. I’ve always been against censorship of the arts, even when I disagree with the message. Plus, I wanted to make a positive stand and proclaim what I believe, not a negative one of smashing what other’s believe.

For an encore I chose Stryper’s “Sing Along Song” and, once again pounded out my love for God:

My win brought with it a lot of bullying. I was never physically abused, but the verbal taunts became a daily occurrence – especially with the students one year ahead of me. One girl even put down “Stryper Fans” as her pet peeve in her graduating year book. My peers were better because I was able to develop a closer friendship with them, but they never really understood me. It wasn’t the music I listened to that bugged them, but what these bands stood for. This, along with refusing to participate in their bush parties and get drunk and have sex, made me the “Jesus kid”. I didn’t mind most of the time, but occasionally it got on my nerves. I had long hair, wore the jeans and leather, loved heavy metal and enjoyed partying like everyone else, but because I also loved Jesus and chose to be sober and chaste, I became an outsider.

It was my church youth group and the band members from Exhorter that kept me strong. I lived for the weekends. To be with these friends and play in my band was where I got reenergized. I endured school. I wasn’t the best at it. I had no close friends there. And I was constantly teased about being a “God-follower”. But I never regret going to public school. It’s where I learned to stand up for my beliefs. I’ve always found it easier to stand up in these settings than where everyone supposedly thinks the same. That’s where we get sloppy and lazy. At least that’s true for me. I need to be constantly around people challenging my faith to keep it vital. I start to slip without that.

I’m a fighter. You push me. I push back. I’m not saying this is always what God wants. And I’ve gotten myself in trouble when I should have turned the other cheek. But fighting comes more naturally to me. The more my friends teased the harder I stood. They didn’t realize that their efforts were doing the opposite of making me shut up. I started wearing shirts to school that had “Love God – Hate Sin” silk-screened on the back. I had a licence plate on my car that said “God is my co-pilot.” I invited my school friends to youth events and evangelistic meetings to see groups like The Power Team, (Christian tough guys who smashed bricks with their heads and then told you about Jesus). And sometimes my friends would come. I’m sure I was annoying for Jesus at times, but my classmates could certainly be annoying for not being for Jesus. I took a stand in my school and showed my friends that I could rock just as hard as they could, (even beating them at their own air band contests). I could grow my hair longer. (I had the longest hair in my class). I could party without getting a girl pregnant and remember the party the next day. I could be a committed follower of Jesus Christ without compromise.

I hope I showed my friends that a Jesus lover isn’t a crotchety church person who is against everything. I give my parents the credit for modeling this for me. They never made faith about my outward appearance. They never commented negatively on my hair or earring or, later, my tattoos. They were even the ones to buy me my first Christian rock album, “This Means War” by Petra. They knew it was about the heart and they were always probing for where my heart was at. My parents even stood up to these crotchety church people on my behalf.

Whenever you take a stand for Jesus you will get attacked from outside and inside the church. While I was standing up for my faith to the point of being bullied at my school, I was being “rebuked” by some of the older folks in my church for being too “worldly”. They didn’t get to know me. I just looked worldly to them and I listened to “rock” music. These King James Bible people would never have made a positive impact on my friends. I wonder if they even had non-Christian friends.

It was my parents who put them in their place. Mom and dad were the number one supporters of my band. When an older church guy tried to discourage our band and even tore down our posters, it was mom who let him know just where he could stick those posters. She warned him about falling into a lake with a millstone tired around his neck if he caused one of these Jesus-loving teenagers, who were spreading Christ’s message in the language of their peers, to stumble. If he were to do that she might be the first to push him off the dock!