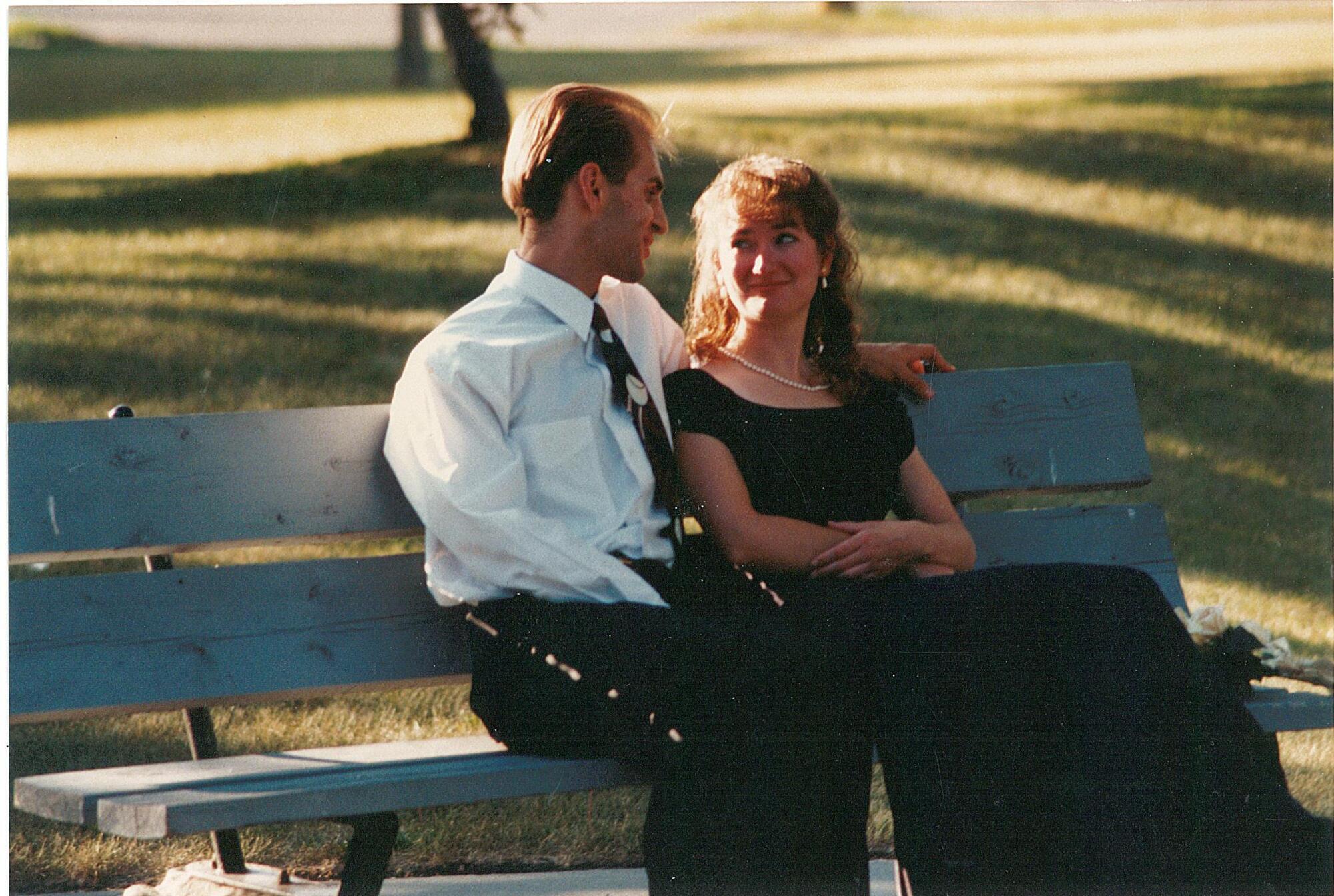 In the summer of ‘95 I met Nancy. I was volunteering for a week as a counselor at Camp Caroline and Nancy was there as the summer song leader. We had little interaction that week and the only thing I remembered about her was that she sang with a country voice and wore too much make-up.

That fall Nancy moved from Calgary to Edmonton to work on her Master’s degree in Speech Pathology at the University of Alberta. Her roommate happened to be helping me run the youth ministry at Northgate. When I had items to discuss regarding youth events I would call Suzanne to talk. At one point Nancy answered the phone. We talked briefly and she then passed me on to Suzanne. The phone calls to Suzanne continued. Nancy would answer and we would talk a bit longer each time. Eventually I started calling just to talk to Nancy.

One of the first things that attracted me to Nancy was the great conversationalist she was. She was so easy to talk with and could discuss things of substance. I liked how she thought. I liked how she expressed herself. I liked how her faith wasn’t full of clichés and “easy believism”. She had a great mind. When I noticed that I even started to like the way she laughed, I knew something was happening to me. So I found my courage and asked her out on a date.

Our first date was to the restaurant Chili’s. I didn’t have a car and so I borrowed one from my best friend Andre. I picked her up at her apartment and, after getting lost (a lifelong driving problem I’ve had), we spent the evening together. It was one of the best times I’d experienced in years (and I’m sure she was wearing less make-up)! Shortly thereafter we started dating regularly and, after only a few weeks of being in a more serious relationship, we headed down to Calgary to meet her family. Being from Edmonton, that weekend gave me one more reason to hate Calgary.

Nancy’s parents did not give me the warmest reception. In fact, it was rather icy. With the exception of Nancy’s sister Tara, I was not well received. I felt Tara was the only one who made an attempt to get to know me and help me feel comfortable. To this day I think Tara is awesome and I enjoy hanging out with her and her husband and kids.

The cold reception I got from Nancy’s parents, however, quickly made Nancy awkward to be around. This made me awkward to be around. And this made everything awkward! The drive home to Edmonton after was very awkward, where these two talkative people even experienced long bouts of silence. I remember arriving back at my bachelor pad, slumping down on my mattress and thanking God that the weekend had finally come to an end. A few days later we decided to stop seeing each other.

But this wasn’t the end. Once the negativity of the weekend washed off, and we’d put 300 kilometres between Nancy’s parents, we started talking again. The two of us connected so well. After a few more months of building up our friendship we decided to give it another try. This time we stayed together for a year and then we got engaged.

That year was full of great memories, but also a lot of painful and emotional distress, particularly on Nancy’s part. The question as to whether or not “I was the one” for her drove Nancy’s anxiety through the roof. (Nancy has long since given up the silly belief that God only has “one” right person for you). Much of Nancy’s indecisiveness came from her mom’s less than enthusiastic response to our relationship. This made us do stupid things like have no contact with each other for two weeks in order to “discover God’s will.” We even did this over Valentine’s Day. That night Andre (also dateless) and I went to see Mr. Holland's Opus and, standing in line with the other couples, were handed a rose when we paid for our tickets. J

Our two weeks of no contact and other excursions to “search for God’s will,” never resulted in any more certainty and put a lot of unhealthy stress on our relationship. Nancy and I are both too logical and skeptical to trust mystical insights and feelings anyway. The two of us came to realize that a commitment meant the risk of making a choice. God wasn’t going to make it for us. He had guided us in what it meant to live with a passion for Jesus, but we had to make the choice about each other. There was no Bible verse that was going to give us the answer. I came to the decision that I wanted to marry Nancy much earlier than she decided about me. Nancy had a harder time, particularly because of her parents.

I decided to do the traditional thing and ask Nancy’s parents for their blessing and for their daughter’s hand in marriage. Though a part of me feels this process to be a medieval concept that treats women like property, I thought I should at least be respectful to her parents. This wasn’t the time to stand-up for the equality of women. I already wasn’t seen in the best light.

We’d been dating for a year and Nancy and I were heading down for another weekend to the dreaded city of the Calgary Flames. That weekend I waited until Nancy was out of the house so I could be alone with her parents to ask them my question. When the time arrived I got them to sit at the kitchen table and told them that I had fallen in love with their daughter and that I would like to marry her. I was asking for their permission and blessing. I had barely finished when Nancy’s mom starting crying, but not tears of joy. Through her tears she told me that this was not God’s will for us. She then got up and went into the living room. That left me with Nancy’s dad. After a moment of silence he looked at me and asked, “Is this what my daughter wants?” I told him, “Yes.” He replied, “Well, I want my daughter to be happy and if this is what she thinks will make her happy than I’ll support her.” He told his wife to come back into the kitchen, explained the situation, and that’s how things ended. I never did get a blessing from them, but at least I got a “we won’t stand in our daughter’s way if this is what she wants.”

Once Nancy and I were engaged things settled down emotionally for us. Our seven month engagement was much smoother than our year of dating. Gone was the tension of “discovering God’s will” and “mom doesn’t like this.” We realized that following God was found in choosing to live as integral individuals who honored each other and not in “finding the right person.” And Nancy realized that she had to make this decision, not her mom. If her mom chose to be unhappy with it, then so be it.

I like to think I helped Nancy become more rebellious. And Nancy has probably tempered me. In fact, Nancy’s becoming more rebellious than me at times. That’s ok. I’ll take a rebelliously passionate woman over an apathetically passive one any day.

I love Nancy. I can’t relate those who talk about the ongoing problems in their marriages. Every year I am more in love with Nancy. Every year she becomes more beautiful. Every year I realize how wonderful it is to be married to her. I’ve never second guessed my decision. I’ve never not wanted to be married to her. Even when she is mad and disagrees with me she is sexy! She challenges me. Pushes me. Encourages me. Comforts me. In all ways, I see her as my equal. We are two strongly independent people who are crazy about and committed to each other.

When Nancy and I got married on March 28, 1998 and lit our unity candle we chose to not blow out our individual candles. The two had become one, but we are also still two. We’ve never felt like we’ve had to do everything together or enjoy all the things the other person enjoys. She can hold her own against me theologically and we are comfortable having different views on various subjects. That’s what I love about her. She’s her own person. She is strong. My heart starts beating faster as I think about her.

When it comes to Nancy’s parents, I’ve learned (and chosen) to love them, although we’ve never been close. I can say one thing with certainty, however, Nancy’s mom was wrong about our relationship not being in God’s will!