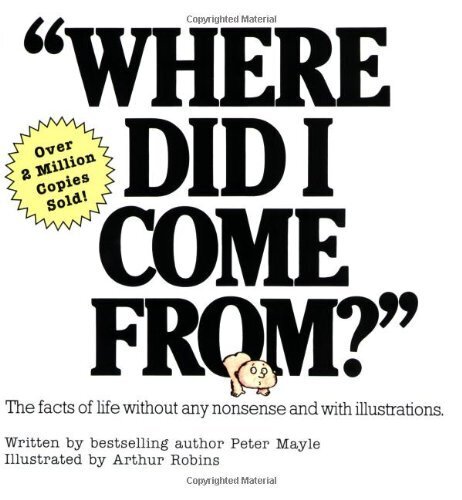 Sex is good. It is a gift from God. And yet, like many in my generation, my parents never talked to me about it. They at least gave me some helpful age appropriate books to read. One of my favorites was Where Did I Come From? by Peter Mayle and Arthur Robins, although, I later experienced an orgasm to be much better than “a little like a sneeze”!

My dad did broach the subject with me once. I was 13 and he was dropping me off at the farm where I was working for the summer. On this day we arrived early. He nervously sat in the car and, avoiding eye-contact, told me everything I already knew from Where Did I Come From? His awkwardness, along with my church’s unspoken message of “sex is dirty and so save it for the one you love”, didn’t help me enter adolescence and face my budding sexuality.

The first time I was exposed to pornography was in grade six. Some magazines had been abandoned in a field and I came across them. The images were arousing and sent pleasurable sensations throughout my body. I felt awakened and alive and filled with heightened energy. At the same time I became aware of my guilt and shame as I knew I shouldn’t be looking at these pictures. How was I to understand this mixture of pleasure, energy, guilt and shame? Were they connected? Was pleasure bad? Was sex bad? Why did I feel guilty? Was my guilt bad? Confused, and with no one I felt I could talk to, like most teenagers, I secretly struggled with what everyone else was secretly struggling with.

Thankfully pornography never took control of me and most times I am able to stay away from it, but it is still a strong temptation for me every day. On three occasions I even stole to get it. (The only times I stole something in my life).

The first time was when I was a teenager. I was walking by a magazine rack and I saw a Playboy calendar. Overwhelmed by a desire to check out the women in it, I quickly placed it into my bag and left the store. Later I felt bad about what I had done and went back to the store. When no one was looking I left an anonymous note and some money on the cash register confessing my sin.

I will relate one other embarrassing porn episode from my last church. I was going to the dumpster to throw out some garbage when I noticed some magazines at the bottom of the bin with naked women on the cover. I threw in the trash, went back to my office, and tried to put it out of my mind. It was impossible. Prayer. Quoting Bible verses. Snapping elastic bands against my wrist. All the typical things some Christians tell you to do didn’t work. What I should have done was called someone and told them what I found or left the office to do something else. Instead, I spent the next hour fighting my thoughts. Eventually, I couldn’t take it anymore. My drive and curiosity were too powerful. I ran back outside and actually jumped into the dumpster to get the magazines, but when I popped my head out my wife and kids walked by. Talk about bad (good!?) luck? I sobered up from the spell I was under pretty fast and dropped the magazines. Fortunately, only my head was exposed and Nancy never saw what was in my hands. When she asked me what I was doing crawling around in the garbage I came up with some lame excuse about accidently throwing out an important document. After my wife left I went back into my office and reflected on the close call. I thought to myself, “There is nothing wrong with our sex life. In fact, it’s good. Why am I crawling through the trash looking for trash like the prodigal eating pig slop?

I am thankful that God has intervened on occasions like this and saved me from going down a path that could have become a real addiction. I have an addictive personality, which is why I try and stay away from video games. Get me started and I can’t stop. I’ll play until my head throbs, my eyes are bloodshot and it’s three in the morning. The easiest solution is to stay away. Our home computer is in a central location and only Nancy knows the password. My office computer has a number of protective measures on it to keep out “adult content.” But I have to stay diligent. None of it is fool proof. Once in a while I’ll be looking for PowerPoint pictures for a sermon and I’ll type in something like “church” and up will pop a picture of a topless woman with the last name “church”. In that moment I have to choose, click the “x” or click the image. I wish I could say I always click the “x”, but I’d be lying.

A book my parents gave me really helped, saving me from a lot of unnecessary grief. It was the book Preparing for Adolescence by Dr. James Dobson. Dobson is a conservative Christian radio personality who started a ministry called Focus on the Family. In this book Dobson took a position that I find healthy, compassionate, balanced, and “biblical” (though the Bible is silent on the subject). Because this is so important in saving teens (and adults) from false condemnation or unhealthy indulgence, and because there is little good teaching in the church, I will quote excerpts from a letter Dobson wrote on the subject; the full letter can be found in his book Bringing Up Boys:

The third situation around which we should be concerned is when the young person becomes addicted to pornographic material. The kind of obscenity available to teenagers today has the capacity to grab and hold a boy (or girl) for the rest of (their) life. Parents will want to intervene if there is evidence that their son or daughter is heading down that well-worn path.

So, what should parents say to their kids about this subject…? I would suggest that parents talk to their 12- or 13-year-old boys, especially, in the same general way my mother and father discussed this subject with me. We were riding in the car, and my dad said, "Jim, when I was a boy, I worried so much about masturbation. It really became a scary thing for me because I thought God was condemning me for what I couldn't help. So I'm telling you now that I hope you don't feel the need to engage in this act when you reach the teen years, but if you do, you shouldn't be too concerned about it. I don't believe it has much to do with your relationship with God."

The fact that I am a Christian and a pastor has not lowered my testosterone, nor do I want it to. Sex is good. God created sex. I’m a sexual being. This is how God made me. I’ve got energy, passion and drive. Why wouldn’t that show up in my sexuality? I’m also bald, and you know what they say about bald men! And, I’m Italian. Yikes!!!

Hearing this, it might surprise you to know that I was a virgin when I got married at twenty-four, and I mean a “virgin virgin!” Prior to my wedding night I hadn’t gone further than kiss a girl. I’m proud of that. But this didn’t come about because of a low sex drive. It came about because of my convictions about God, sex and women. I wanted to honor God. I knew he gave sex as a marriage gift. Even if I didn’t always understand why he made it that way, he was my God and I wanted to do what pleased him more than what pleased me. I also wanted to honor the women I dated, as well as my future wife. Therefore, I discussed high standards with all the girls I dated, thanks to the grace of God, was able to keep my commitments.

Why this doesn’t always spill over into the times I’ve viewed pornography is because of how much easier it is to justify that these aren’t “real” women and that I’m not actually doing anything with them. Of course, this is a lie. And the more I realize the hurt, pain, exploitation and destruction pornography causes people in the industry and the consumers, the easier it is to resist.

The reason Nancy and I have maintained a good sex life is because of communication. Neither of us came into our relationship with any “experience.” But from early on we talked openly about sex. We read books together and have gone on retreats on the matter. We’ve been open about learning and trying new things. And we try to understand and fulfil each other’s needs and desires.

I have little tolerance for those who think we shouldn’t talk about sex in church. It’s mentioned in almost every book of the Bible. It has permeated every culture since the dawn of time. It is one of the most powerful human drives. God created it good and has given it to us as a gift to be one of the most fulfilling and bonding experiences for a married couple. But, used wrongly, it can be one of the most destructive vices. Not talk about it? Give me a break! We need to help people and stop hurting them!