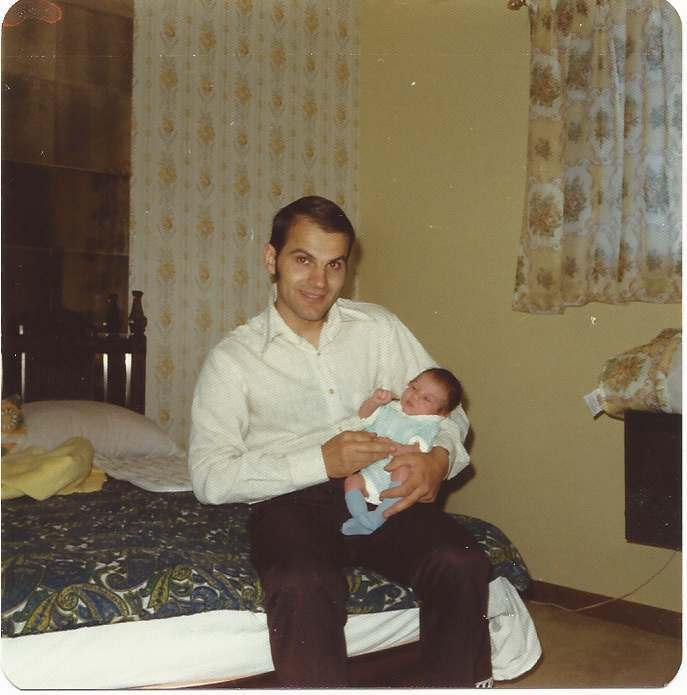 In 1946, in the small town of Maniago in northern Italy, my dad (Alberto) was born into a poor family. His birth was the result of grandpa returning from the war and celebrating with grandma. Grandpa fought for the Italians alongside the Germans in WWII. When the Italians switched teams, grandpa spent the final year of the war in a German concentration camp and was eventually rescued by Americans. I saw firsthand the effect war had on grandpa when I was 16 and visiting him in Italy. I’d bought a replica of a medieval sword and when I showed it to him, grandpa freaked! He attempted to take the sword from me and break it in two. My dad intervened and later told me that what I thought was a cool souvenir was an instrument of death to him. The reaction of my grandpa is still engrained in my memory to this day.

Dad was the second child of his parents, but grew up as a first born and never met his older sister. When Grandpa left for the war he left behind his wife and their newborn daughter. During his time away his daughter got lead poisoning and died from chewing on some painted toy blocks. When grandpa came home from the war it was to see the grave of the daughter he barely knew. A couple of years after my father’s birth his brother Angelo was born and this was to be the family my dad grew up in.

Dad grew up playing soccer, running through the woods with his friends and doing chores around the house. He ended his formal education in grade 8 because of the economic stress his family was under. After quitting school he worked for three years making switchblades (the town of Maniago is famous for its knives), and then worked for three years in a grocery store. All the money he earned was brought home and surrendered to the family budget.

At the age of 20 my father joined the Italian army for 14 months. This was a required service for every Italian man at the time. In the army Dad earned the rank of corporal and started body building and drinking heavily. Few of my dad’s memories of the army are positive and he was glad to get out when he did. He figures he would have become an alcoholic if he stayed much longer.

His time in the army came to a close in 1968 and, through a contact he had with an uncle, decided to come to Canada to find a better life. As he was waiting in the Italian airport to catch a plane his mother kissed him goodbye and, through tears, told him that she felt like this would be the last time they would see each other. Dad passed this off as an overly emotional mother until he got word two years later that his mother had died from a complication during an operation. That time in the airport was the last time my dad and his mother saw each other. She died at the age of 53.

While in Canada dad was set up on a New Year’s Eve blind date to meet a High School girl named Irene Silbernagel. Their first date was not a success. The two of them did not hit it off and ended up spending the evening trying to avoid each other. After much coaxing from friends they remained in contact, but nothing more developed between them until dad went back to Italy for his mother’s funeral. While there, dad and Irene began exchanging letters and chemistry started to bubble between them. After half a year in Italy, dad decided to come back to Canada because he had fallen in love.

Irene’s mother was not excited about this development. She had warned Irene not to get involved with an Italian, as they had a bad reputation for the way they treated women. Irene obviously did not see this in dad and decided to not heed the advice of her mother. In 1971 Alberto and Irene got married in a wedding ceremony shared by a Catholic priest and a Lutheran minister. A couple of years after the wedding the two of them moved to Leduc where, in 1973, they become my parents. In Leduc dad began his painting business which, 41 years later, is still in operation, although now semi-retired.

Dad has always placed a high value on work, sometimes too high. He instilled in me the virtue of doing things well and the vice of sometimes being perfectionistic. Growing up he taught me practical skills like chopping wood, cutting grass and painting houses, but I felt he pointed out what I did wrong more than what I did right. This encouraged me to pay attention to detail, but also caused me to feel like I could never measure up.

Dad was not one to take advantage of a customer and would often undercharge to make things easier for the people he was working for. This became a continuous tension between my parents as mom kept the books. Dad’s work ethic and sympathy for others has certainly impacted the way I work and my views on money. These traits are rooted in my dad’s poor upbringing and his later Christian convictions.

The other value I saw in my dad was his desire to keep learning. Though he only had a grade 8 education, it never stopped him from coming to Canada, learning English, starting his own business and reading widely. I have many memories of my father reading. A lot of those memories are of him pouring over the pages of the Bible, but he also spent time reading history, biographies, commentaries and devotional books. My dad’s love for learning and his refusal to let his limited education get in the way became part of my desire to become a lifelong learner and reader. I’ve never harboured the idea that tradesmen are incapable of being broad minded and liberally educated, important characteristics for people who want to live in a free and civil society.