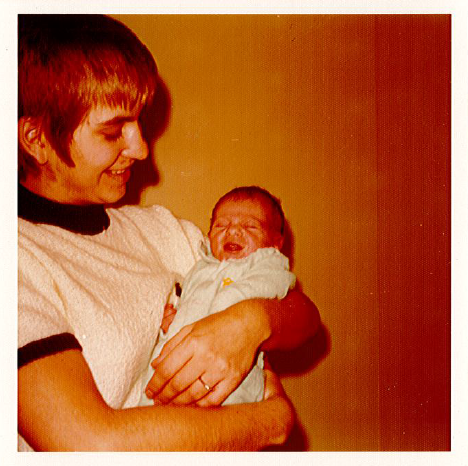 In 1952, in Regina, Saskatchewan, Irene Silbernagel was born the third of five children. There she grew up on welfare and shared a bedroom with her two sisters (and the same bed with her older sister) until she left home at the age of 19. When Mom was 13 Grandma became pregnant with her sixth child, but chose to give her up for adoption. It wasn’t until Mom was in her late 40s that she would meet this sister for the first time.

My mother’s parents didn’t get married until after my parents’ married. During mom’s upbringing Grandpa carried on two relationships in two different parts of town. Grandma was basically his mistress, who bore him six children.  Because he didn’t want to pay child support, Grandpa waited until all the kids he had with his wife turned 18, divorced her, and then married my Grandma. During the time Grandpa was married to his first wife he never financially supported the family he had with Grandma. Thus, mom grew up on welfare.

When I visualize Grandpa (who is no longer alive) I see a grumpy old man who never did anything with us other than play cards when forced, and even then he never talked to us. Grandpa also had a drinking problem and, when drunk, would become violent. On a few occasions he was thrown into jail. One time Grandma reacted to another of Grandpa’s drunken rages by trying to light the house on fire while the kids were still in it. When fights like this occurred mom would run into the streets with her brothers and sisters calling the neighbours for help.

Mom remembers never being allowed to be seen in public with her father and recalls how traumatic that was for her as a little girl. Grandpa would come home on the weekends and stay in the house. Mom told her school friends that her dad was away working during the week and only at home on weekends, but then too tired to go out. By High School mom grew weary of covering up for her dad so that when she had to fill out her High School application and was asked about her father she simply wrote, “Deceased.” When the school phoned Grandma and she found out what mom did, Grandma was not impressed. For years my mother harboured bitterness towards her father and it was a long process (and through a relationship with Christ) that she was eventually able to forgive him.

Mom’s first connection with church was through a Sunday school program put on by the Lutherans. Although Grandpa and Grandma never went to church, that didn’t stop them from dropping their kids off at one. Hey, free babysitting! Mom’s memories of church were positive and this would be the entry point for my parents to later begin their spiritual search. This happened several years into their marriage when a Lutheran church was offering some evening classes on “getting to know Jesus.” Because of the good memories mom had with this denomination, they decided to attend. She felt this group was safe and not a weird cult.

In High School mom excelled. After graduating she entered a trade school and trained to be an x-ray technician and later became an MRI technician. During my years in high school, I was a lot closer to mom than dad. I remember many late night conversations discussing life and the Bible with her. During those years my mom was the most formative person in the development of my faith, which later put a strain on our relationship when I began making my faith my own.

In college I began questioning my beliefs and I developed a number of views different from my mother’s. I became frustrated when I didn’t perceive her to be growing like I was. I needed more than my mom could offer and I felt angry with her for not being able to deliver. Looking back, my expectations were probably unrealistic, and I’m sure there’s plenty of material here for the Freudians to analyze, but this gradual straining of our relationship has never really recovered. It is not that we hold animosity towards each other. It’s just that we are not at close as we once were.

Growing up I always saw my mom involved in church. She was either leading home Bible Studies, teaching Sunday school or mentoring and counselling individuals in crisis. She is currently an elder at the church she and dad attend. I didn’t grow up in a home where women didn’t teach or take on senior positions in church. My mom did both of these and she did them well, and with the full support of dad.