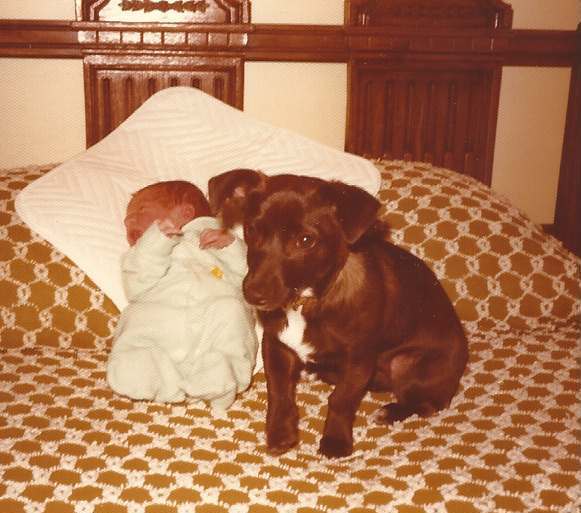 I grew up in a big yellow house in the country on top of a valley. In addition to our three acres of land I use to explore the abandoned sheds of the nearby farm and make up adventures in the woods. In this setting we had a lot of pets, some of whom I found in my exploration. At different points we had rabbits, gerbils, birds, guinea pigs, dogs, cats, salamanders, snakes, frogs and even a tortoise. They were never big pets. Even our dogs were small. And what made a pet special was when we gave it a name.

Misty was the first dog I knew by name. She was part Terrier and part Chihuahua. She was part of my parents’ family before I was born and immediately took to looking after me. Misty would lie beside my crib and, when I woke up, go find mom to let her know her baby was awake. As I got older, Misty was a great soccer companion. She loved soccer and would push the ball around the yard with her nose so fast it was difficult to get it away from her. I could also pass her the ball and she would dribble it back for another kick. Every time dad and I went out to play soccer Misty would join us. It was sad to see her get old and not be able to do the things she loved. She eventually found getting off and on the sofa difficult and would gasp for breath when she exerted herself. After fourteen years we knew the time had come. She was now only suffering and so we made the trip to the vet and put her down. Misty was my closest pet for the first twelve years of my life and I loved her.

I resented the next terrier/poodle we got and started being mean to him. This dog was not Misty and was also a gift to my brother. Michael even called him “Adam” after his middle name. Resentful and jealous I took it out on Adam. I yelled at him and tried to see how badly I could scare him. This went on for a few months when I scared him so badly he cowered in a corner. As I looked into his eyes something reached my heart. “What am I doing to this puppy?” I decided to make an effort to change my behaviour and ended up loving the dog. As I’ll display a few times in these reflections, certain memories remind me of my capacity for evil and why I need Christ. I concur with what many who have found Christ have come to realize: “Christ Jesus came into the world to save sinners--of whom I am the worst.” (1 Timothy 1:15).

We also had a number of cats, but they didn’t seem to last very long. The first cat I remember was named Boots for her white paws on her otherwise grey coat. I was sleeping on a mattress in the basement at the time and Boots would always sleep at the foot of my bed. How can you not bond with a cat like that?

I don’t remember our second cat’s name before it became Miracle. One morning dad started the car and heard a thud and the shriek of a cat. When he opened the hood he found Miracle with a shortened tail and a broken paw, but alive. Miracle disappeared about six months later. She either found a better home or her miracles had run out and she became someone’s breakfast.

I’ve always been partial to cats over dogs. The first pet Nancy and I got was a calico cat we named Frodo. Frodo was great. Like Boots she always slept at the edge of our bed, and whenever we sat on the couch to read, wanted to cuddle. When we had Micah he developed a chronic cough and had a problem with croup. It didn’t take long for us to discover his allergies to cats and so we had to decide to give up Micah or Frodo. We chose to give up the cat. This seemed to help Micah’s cough and I found myself breathing better as well. It happens I’m also allergic to cats! I’d been so congested I ended up needing nasal surgery to clear out my sinuses. I had forgotten what it was like to breathe clearly.

Next we got a fish. No allergies with this one. He was a Chinese fighting fish whom the kids named Pharaoh. We presented him to the kids on Christmas morning, 2009.  Pharaoh lived for a year. He was boring and the kids complained that he wasn’t cuddly.

When we moved to Delta, after much pleading from the kids (especially Faith) we decided to get another cat. Nancy was convinced that we could train one to be an outside cat that would stay on our property. I was skeptical, but she claimed to have had a cat like this growing up and so I gave in. We got Sophie from an animal shelter and made her a living area in our garage. One of our garage doors came with a cat door built into it so that she could come and go as she pleased. For the first couple of days we took Sophie around the property on a cat leash to get her familiar with the place. After that we let her off her leash and would follow her around. Every time she stepped off of our property we sprayed her with water. Would you believe that after a few days she was trained? She is a great cat who loves being around us when we are outside. And whenever we pull up to the house in our car she runs out to greet us. She is not as cuddly as Frodo, but the kids love her and she tolerates them when they pick her up and give her a hug. Each night we feed her and lock her in the garage so that she is safe. As long as Micah and I keep washing our hands after playing with her, our allergies have been fine.